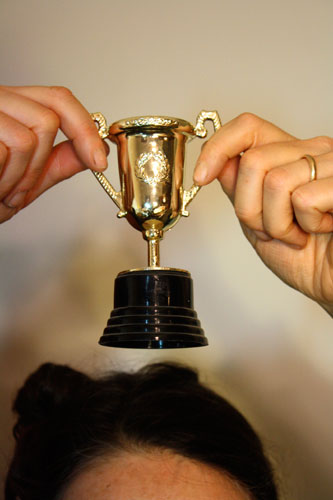 While working in my studio a few days before traveling to Kansas City for installation of “Pick Me Up (a few things),” my exhibition in Epsten Gallery, I ruminated on the Bird in the Hand project that KCJMCA Curator, Marcus Cain so poetically titled.  Being a “bit” of a collector (as the show more than hints at), I despaired a bit at the thought of narrowing things down to one significant object.  However, at that moment, I looked up and my eyes alighted on one of several objects that perch on some molding toward the ceiling of what is technically the master bedroom in the home where my supportive partner gave me my pick of rooms to work in.  The object is a six inch tall plastic trophy that my paternal grandmother won in a competition during her years on the bowling team at the East Haven Health-Related Facility in the Bronx, the borough of New York City where I was born and where my grandmother spent the majority of her life.

Back to Main Menu | Previous Submission |  Next Submission