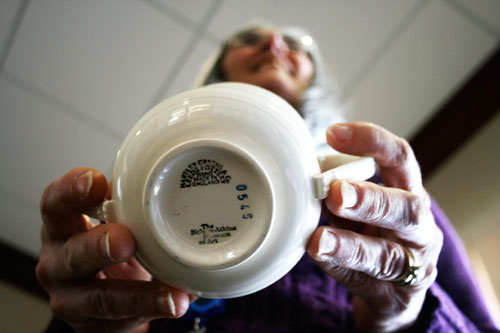 Forever Cup 0545 from Clare Twomey: Forever exhibition at the Nelson-Atkins Museum of Art

I entered this lottery to see if I could get one of Clare’s cup’s from the exhibit. My birthday is May of 1945 so I chose cup 0545 and I got it!

I feel so fortunate to be the owner of cup 0545. I saw the article in the KC Star about the exhibit and entered my application for a ‘Deed’ on October 9, 2010. I was contacted by email to notify me and visited my cup several times before owners were able to pick up cups in January. The interactive nature of this exhibit really appealed to me. I not only felt ownership of a cup from the exhibit but for the Nelson itself.

Another opportunity to display my cup arose when Adriane Herman and the KCJMCA created the visual project “A Bird in the Hand” at Village Shalom. I chose to share my cup (which I love) as a representation of how art builds community by drawing participant/ observers into art projects and opening dialogue as well as opportunities for self-reflection.

It is wonderful that the Nelson-Atkins and the KCJMCA curated/hosted these interactive exhibits which have brought joy to so many people. I plan to ‘retain in trust’ and proudly display Forever Cup 0545.

Back to Main Menu | Previous Submission