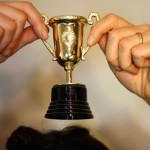 While working in my studio a few days before traveling to Kansas City for installation of “Pick Me Up (a few things),” my exhibition in Epsten Gallery, I ruminated on the Bird in the Hand project that KCJMCA Curator, Marcus Cain so poetically titled.  Being a “bit” of a collector (as the show more than […] 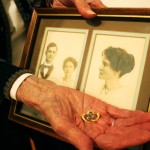 The pin on mother’s wedding dress in this photograph. My parents were married in 1914. Submitted January 25, 2011 Back to Main Menu | Previous Submission |  Next Submission 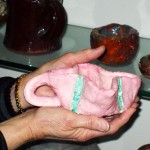 My Collection My favorite collection is the one made up of various ceramic pieces my two children made, year after year, as they grew up.  As an artist and a mom it was amazing to see the changes and development in their work.  Submitted January 28, 2011 Back to Main Menu | Previous Submission |  […] 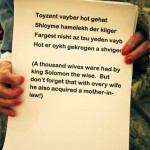 Submitted January 25, 2011 Back to Main Menu | Previous Submission |  Next Submission 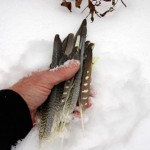 Kramer in My Hand The feathers in my hand belong to my beloved departed cockatiel, Kramer.  I spotted Kramer in a pet shop sporting a broken wing—he was cranky and loud but I fell for him on the spot.  This photo is taken over the site where he is buried in my back yard. Submitted […] 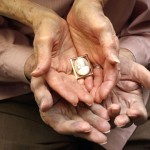 My grandfather died January 19th. My grandmother was holding his hand when he took his last breath. Here, exactly one year earlier, he holds her hands, which cup the cameo he commissioned that bears her portrait.The delicate blush-colored shell was carved 67 years before, shortly after they married. While stationed in Naples during World War […] 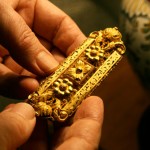 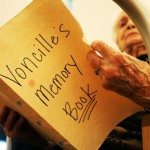 PROJECT OVERVIEW: A Bird in The Hand (beloved things) is a community visual project created by The Epsten Gallery on the occasion of the solo exhibition Adriane Herman: Pick Me Up (a few things) at the Epsten Gallery at Village Shalom ( January 23 ‐ March 6, 2011). The purpose of this project is to provide […]