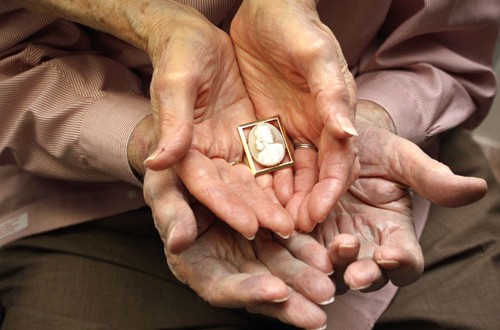 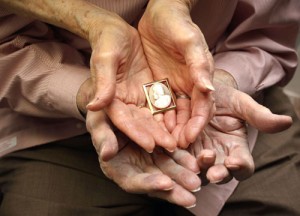 My grandfather died January 19th. My grandmother was holding his hand when he took his last breath. Here, exactly one year earlier, he holds her hands, which cup the cameo he commissioned that bears her portrait.The delicate blush-colored shell was carved 67 years before, shortly after they married.

While stationed in Naples during World War II, my grandfather passed a house with rustic wood tables strewn about the yard, displaying finely carved cameos for sale. He stopped one day to inquire about a commission, turning out his pocket to produce a small photograph of his new bride. The gesture, a few words in broken English, and 10 cartons of American cigarettes formed the terms of their contract.

My grandmother wears the cameo on special and sacred occasions. I’ll be helping her fasten it near her heart for my grandfather’s funeral this afternoon.

Back to Main Menu  | Previous Submission  |  Next Submission